Mt Zion Congregation
Schedule of Services and Events May 2022 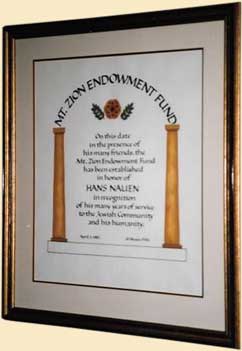 The Mount Zion Endowment Fund, established on April 3, 1982, 10 Nissan, 5742, shall be formally known as the Hans Nauen Endowment Fund. The fund honors Hans Nauen for his many years of service to the Jewish community and for his humanity.

On this date in the presence of his many friends, the Mt. Zion Endowment Fund has been established in honor of Hans Nauen in recognition of his many years of service to the Jewish Community and his humanity.
April 3, 1982
10th of Nissan 5742